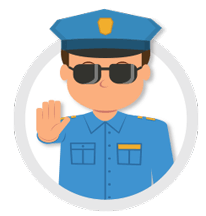 Drinking and driving is never the way to go, but no matter how much you’ve drank, if you’re pulled over, there’s a huge likelihood you’ll fail the sobriety test. Police have 7 ways to determine whether or not you get a DUI, driving under the influence.

All 7 ways are designed to ensure failure.

What Is a Field Sobriety Test?

Field Sobriety Tests are used by police officers to determine whether or not you have been driving under the influence, DUI. Influence means anything can impair your ability to operate a motor vehicle: any drugs or alcohol. In addition to the term DUI, police also use the term DWI, driving while intoxicated.

Suspects do not “pass” or “fail” Field Sobriety tests. Police determine whether or not they’ve observed “clues” that can lead to a DUI or DWI during tests.

There are 3 tests that have been scientifically “validated” by the NHTSA (National Highway Traffic Safety Administration) that you would likely fail:

What does the officer look for during the HGN test?

The HGN will only be admissible if the following factors are met:

HGN can be caused by a number of factors that are not related to alcohol or drugs such as:

The Walk and Turn Test has two stages:

What does the officer look for during the Walk and Turn?

The Walk and Turn test will only be admissible if the following factors are met:

Instructions were given as mandated by the NHTSA.

A failed Walk and Turn test can be attacked with the following arguments:

The One Leg Stand Test is meant to assess the suspect’s divided attention.

The suspect is required to divide his/her attention into two tasks:

Task 2: A physical task that involves balancing on one foot for 30 seconds.

What does the officer look for during the test?

The One Leg Stand Test will only be admissible if the following factors are met:

Instructions were given as mandated by the NHTSA

The test was administered under safe conditions:

A failed “One Leg Stand” test can be attacked with the following arguments:

Other tests that have not been scientifically validated, but that you will certainly fail if it’s the officer’s will:

Reciting Specific Portions of the Alphabet

99 times out of 100 you are going to fail these tests if the officer has already decided you are guilty of a DUI or DWI.