Home » Blog » Domestic Violence on the Rise in San Jose

Domestic Violence on the Rise in San Jose

In San Jose, amidst the innovation of Silicon Valley and the beauty of some of California’s best gardens and parks, there has been a disturbing rise in domestic violence. As law enforcement and the legislature scramble to combat the increase of domestic violence crimes in San Jose, some defendants are being falsely convicted or face much harsher penalties than if their same actions were charged under ordinary criminal statutes. 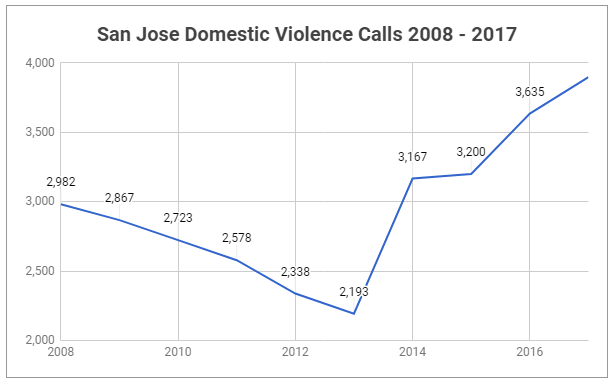 Unfortunately, the statistics from San Jose and Santa Clara county reflect a nationwide epidemic of domestic violence: according to a 2017 CDC report, homicide is the leading killer of women under 44 years of age, with nearly half of those homicides being committed by a current or former intimate partner.

Typically, domestic violence cases involve a spouse or significant other; however, a charge for domestic violence can occur whenever a crime is committed against someone who is closely related to the perpetrator. Types of domestic relationships that satisfy the statutory requirement include:

Proving that the individuals at issue fall into one of the first three categories is relatively simple; defining who qualifies as a “cohabitant” however, can lead to false convictions for domestic violence when a true domestic relationship may not exist.

Specifically, California law broadly defines abuse as “intentionally or recklessly causing or attempting to cause bodily injury or placing another person in reasonable apprehension of imminent serious bodily injury to himself or herself, or another.” Domestic violence is more narrowly defined: “abuse committed against an adult or a minor who is a spouse, former spouse, cohabitant, former cohabitant, or person with whom the suspect has had a child or is having or has had a dating or engagement relationship.”

To be convicted of a domestic violence charge in San Jose and throughout California, the state requires both that the perpetrator’s actions constituted abuse and that there was a qualifying relationship between the perpetrator and the victim.

Defending Against a Domestic Violence Charge in San Jose

With domestic violence being such a large factor in the deaths of women, it’s understandable that California’s lawmakers wanted special legislation to protect victims.

Unfortunately, the state’s criminal statutes are both extremely broad and carry severe penalties for those convicted; in addition to false convictions, some defendants might face harsher punishments under the domestic violence law than if the same actions were charged under normal criminal statutes.

Also, certain nuances in the police department’s “Guidelines for Law Enforcement Response to Domestic Violence” require that the responding officer, once called to the scene, should not consider whether one or both parties no longer wishes to press charges. Although designed to prevent victims from being menaced into not pressing charges by their abuser, in practice some calls are made mistakenly or “in the heat of the moment” and once the police arrive, there’s no way to prevent criminal charges from being filed.

If you are facing a domestic violence charge in San Jose, there are defenses that a criminal defense attorney can raise on your behalf in court: whether your actions fail to qualify as abuse under California law, the relationship between yourself and the alleged victim is not a statutory domestic relationship, you acted in self-defense, or for another reason, a good California criminal defense attorney can help protect you from the severe penalties of a conviction.